Showing posts from November, 2008
Show All

November 24, 2008
Last Saturday I took Danish to Astro for an audition. He's been asking me to take him there because he said that there was an audition for kids' programme called 'Tom Tom Bak'. Personally, I don't quite favour some of the segments in the show except for one where kids were asked to talk about any topics with the compere - Aznil Hj Nawawi. When Danish mentioned about this audition, deep down inside, I wished that he would just leave it as it is. But he kept on boasting to everyone that he's meeting Uncle Aznil on Saturday. Gosh!!!! Yup, being a good mother, I had no choice but to oblige.... So, there we were, at the entrance of Astro....wow, there were many people and kids around. I wondered if Danish ever got a chance to register. Well, we herded through the crowd and managed to get to the registration counter. I quickly filled up the form and the staff gave Danish number 216. I found out that there were about 25 kids ahead of us and we had to wait for the cre
4 comments
Read more

November 21, 2008
Last night was the first episode of a Malay drama entitled 'Gelora Di Hati Sarah' on RTM1. The main casts were Fauziah Latiff, Rosyam Nor, Datuk Rahim Razali, Aida Rahim and Liza Othman. I came across a write-up on this drama in one of the local newspapers the day before and what caught my interest to watch it was of course Fauziah Latiff... Fauziah Latiff is a singer and although I might not be her biggest fan but I kinda grew up listening to her songs since I was in primary school. Her songs are mostly pop ballads and amongst my favourites are Teratai Layu Di Tasik Madu, Setia Ku Korbankan, Enggan and many others. Those were the times when I was in melancholic mood and these songs became my comfort... I also watched her in theatre - Rubiah - few years back where she acted as the lead role in the play. Not bad at all and I could still remember vividly the act where she had to recite the Quran and her voice was so soft and sweet. Ok, Fauziah Latiff might not known as a star
7 comments
Read more

November 20, 2008
Have you ever encountered such people who are just so narrow-minded that you feel like wiping them off in a blink? I have to face such people all the time (only during office hours)..... Why must they crack their heads thinking of something to say to me just to make me change my mind or decision? Could they be thinking that I would follow and do whatever they want or could they be doing it just because they are jealous of me? I know that I have all the attention here at the office since I chaired lots and lots of meetings and committees (compared to others)....Maybe they want to take over my place...go ahead, sit there and you'll vomit in a sec.... To tell the truth, sitting here at my position in this department is definitely not easy. It's tough and it drains you to the bone......only those who are strong mentally, physically and emotionally could handle and manage the department well. I'm not boasting here, I'm telling the truth!! I have and had tough, difficult a
5 comments
Read more 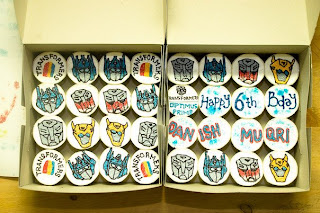 Last 8 November was Danish's 6th Birthday. We organised a small party at his classroom in school. When I entered the classroom with two boxes of cakes, Danish had all smiles....I even brought party packs for his classmates to enjoy....I specifically ordered cupcakes from my good friend with Transformers as the pictures on each cupcake. Danish loves Transformers so much, so, I thought, well, why not? And my friend was so kind enough to design the special cupcakes. Danish, of course, was smiling from ear to ear and his friends went ooohhh, aaahhhh and wowww all the way...hihihi...
4 comments
Read more 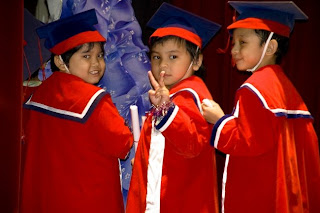 Dear Readers, Sorry for the long silence.....too many things to look after and manage, well...it just happened, I guess. There are so many stories and issues that I want to share here in my precious blog and I'll update one by one when the time permits. Well, my eldest son, Danish Muqri graduated from Q-Dees on 1st November 2008. All of us (including his grandparents) went to the concert cum graduation ceremony of his kindy. His performance was a traditional zapin dance - Cindai, a song by Dato' Siti Nurhaliza. He's been practising for about two months or so at school plus at home too. I was his unofficial choreographer at home and he was a fast learner I might say. On the day of the concert, we sent him to school and there were 3 buses waiting for the kids. We left him there and headed on to the hall. The auditorium was about 20 minutes away. When we arrived there, I saw my parents sitting at a corner waiting anxiously for their grandchildren. About half an hour later, t
1 comment
Read more
More posts

Lizamurni Lokman
A Sagittarian who is passionate about cooking, music and books. A mother to four cheeky heroes and a lovely daughter, a wife to an extremely busy husband, a daughter to wonderful parents and a one and only sister to two brothers.